Contributing to society is a human right

A few days ago in NYC I saw a play Not By The Bread Alone presented by a  group of deaf and blind actors from the Nalaga’t Theater in Israel.

(From their site http://www.nalagaat.org.il/theater.php) “The “Nalaga’at” Deaf-blind Acting Ensemble was founded in order to integrate deaf-blind people into the community, promote their needs and aspirations and provide them with the opportunity to express themselves and exercise one of the most basic rights – to contribute to society… The show enhances public awareness to the fact that deaf-blind people need to be accepted as equal citizens and promotes universal values of solidarity, mutual respect, tolerance and coexistence.”

The play proved so poignantly that all of us want to be part of society and culture, that everyone has abilities and insights to share, and that some of us, like these actors for example, are very courageous in their attempts to be included.

Having to confront the fact that they live in a completely dark and silent world was so disheartening, more so when considering my own life in which I take so much for granted.

The power of words is a video on a similar topic. 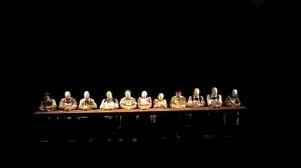 Books lift us out of the smallness of the present

out of the smallness of ourselves

Stanley, B.J. The Communion of Strangers

Mohammed Ashraf doesn’t go to school.
From sun-up till moonrise
he measures, cuts, shapes, punctures and sews soccer balls,
which then go rolling out from the Pakistani village of Umar Kot
towards the stadiums of the world.
Mohammed is eleven. He has been at this since he was five.
If he knew how to read, and could read English,
he would understand the label he sticks on each of his products:
“This ball was not made by children.”

Despair
Six year old Andy was the cause of my giving up on special education and moving on to look elsewhere for solutions to the problems of teaching learners who are different than mainstream. Andy was the sweetest, brightest and most expressive of my students. His huge blue eyes shone with the light of deep knowledge and understanding. The stories he told after an event or a weekend were sometimes the highlights of my days as a resource room teacher in a Jewish elementary school. I looked forward to our daily meetings.
Andy was in 1st grade and already classified as learning disabled. He was diagnosed with ADHD and put on Ritalin “to help him function in school” and also to help mom, who had 2 younger children at home and didn’t have the strength or time to deal with Andy’s needs.
Since it was inclusion time in the history of special education, I joined Andy in class and sat next to him to help him focus on his work. It was early October and the task for the children was to fill in the blank in the sentence “In my succah I ____”, which was written on the bottom of a sheet of paper. After filling in the blank (with words like read, play, eat), the children were to draw themselves doing the activity they wrote about.
Everyone got to work while Andy was looking out the window dreamingly. When I mentioned the paper in front of him, he responded, as usual, “I’m phinking, I’m phinking”. After falling off his chair once, sharpening his pencil three times and searching the floor on all fours for his eraser, I pointed out that all the other children at our table were already drawing while he hadn’t started writing yet. He suggested that he begin by drawing, but the teacher didn’t allow doing things in a different order, so he began looking around the room at the alphabet charts, the word board, the posters. He walked up to look closer at some words, but couldn’t find what he was looking for.
Finally I asked if I could help him find a word or spell one that he wanted to use. Andy sized me up and replied: “OK, but you can’t tell me how to spell words that I already know”. I told him it was a deal, my curiosity peaking as I was trying to figure out what was brewing for so long in his fertile mind.
“In my succah I invited my ancestors”, the sentence finally emerged, accompanied by a wide smile and shining eyes. As I hugged him, my face reflected the glow of his.
The teacher wasn’t happy. The time was up, everyone was by the door on the lunch line and Andy’s paper was still blank. He would have to take the paper home and finish it with mom. Andy’s smile disappeared and the victory fizzled away.
Looking around at all the drawings on the little tables around me, I thought about how unjust the situation was  – the children who were lock-stepping and reflecting each other’s mediocrity were considered “good”, “normal” students ,while bright, creative Andy, who put much thought and effort into his work, coming up with a response that was so original, sophisticated and different… Andy wasn’t good enough.
Special education, I understood then, was like an invisible prison, with unseen but real walls, doors and locks. A prison for children who were different from the mainstream, who think, learn or behave differently than the accepted norm. Their foreheads are stamped in big, bold, invisible letters saying “different” and they are locked away in the prison of special education for crimes against the mundane and the routine. In this prison of special education there are seldom pardons or shortening of sentences, even for very good behavior. It is a life sentence, not only for the duration of the child’s years in school, but in terms of self-esteem, it is a crippling blow that never heals.
I was not willing to be a warden in such a prison. I handed in my keys.

on October 24, 2012August 9, 2015Categories BlogLeave a response
Follow me on Academia.edu